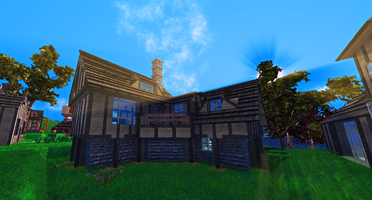 Artifying continues with a new house added to the village, a new appearance for doors, and a new fancy rounded top door. Lighting and color has also undergone some improvement tweaks.

When I got done with building out the new village house, I realized it had actually ended up 1 block off from where it should have been. So I made a new Copy Paste Tool to craft that you can use to make a copy of any selection of blocks and then paste them anywhere else. It still requires having the right blocks if you're not in freebuild, but on top of fixing stupid planning mistakes it can also help speed up building of large structures by templating out components (like parapets!) or allow you to share your designs with others in multiplayer.

Finally there's been a bunch of fixes and tweaks that are laid out in the patch notes. The Thin Plaster block had a bunch of appearance fixes, cursor detection when placing blocks is improved, and you will no longer attempt to "use" things while placing objects, so feel free to put a candle on your carpentry bench if you need the light.

Patch Notes
* Added new house to village
* Added Copy Paste Tool which allows you to select an area of blocks to copy and paste in a new location (if you have the materials)
* Added door with rounded top
* Improved the look of lighting
* New look for doors
* Using any sort of mass block tool will now show a selector from your start block to your cursor location so you can see which blocks will be affected
* Fixed some holes in thin plaster
* Fixed some block placement detection issues
* You'll no longer attempt to "use" things when placing stuff, which should let you do stuff like place candles on furniture again
* Added single block slope roof peak for plaster houses
* Fixed icon for thin plaster
* Fixed case where placing or chiseling a slope would just place a regular block